ON MONDAY July 11 – four days after Britain’s worst terrorist attack – the largest army in the world confirmed its troops and personnel had been ordered out of London.

That same morning a 14-year-old boy from Hockley, in Essex, travelled to the City by train to complete his work experience.

In daring to take a journey the American military believed too dangerous, Jack Linton, from Uplands Road, is perhaps remarkable.

All the more so, because only a few days earlier he lay trapped and injured on the floor of a tube train carriage between Liverpool Street and Aldgate stations, where at least eight people were killed and more than 100 wounded.

“I thought I was going to die,” he says.

“There was smoke everywhere and people were screaming. It was frightening. But I wanted to go back.”

Jack had travelled to London on Thursday morning with his sister Sarah, 22, before making the final stretch of his journey alone on the tube.

A pupil at Greensward School, in Hockley, he secured a work placement at the Orient Express offices in Blackfriars and was working his fourth day.

He arrives too early at Liverpool Street for his 9.30am start. Ignoring the next few trains, Jack stops at a burger bar for hash browns before finally boarding the fateful Circle Line train.

At 8.51am, the second of four explosions that morning rips open the third carriage. The force is so strong it blows open the windows two cars away, showering Jack in glass and cutting his face.

Fire, fumes and the acrid smell of chemicals fill the train. Jack and the other passengers left standing fall to the ground gasping for air.

“I couldn’t breathe,” he explains. “There was black smoke everywhere and it was very hot. I put my tie in my mouth ’cause I’d seen that done in films, and laid on the ground.

“Then people began shouting for any doctors or nurses on the train.”

For 25 minutes he waits in the dark while underground staff and firefighters evacuate carriages one by one. The most seriously injured are brought out first. Jack is finally led away, bloodied and blackened by the blast. Dead bodies and limbs lay across the track.

“Before we left someone said it was the train engine that had exploded,” he says. “But as we passed the carriage I knew it was a bomb. It was ripped open like a tin can.”

After being guided to the surface and giving his details to police, Jack is left wandering up and down Aldgate in a virtual daze while the more seriously injured are treated. He finally rings his sister and she rushes to meet him, herself having just heard a bus explode in Tavistock Square at 9.47am.

Jack is still bleeding and suffering pain to his left ear from the blast as the siblings ask a policeman for help. They are put in an ambulance and taken to the Royal London Hospital.

He was eventually transported back home to Essex in a pool car supplied by his sister’s employers. 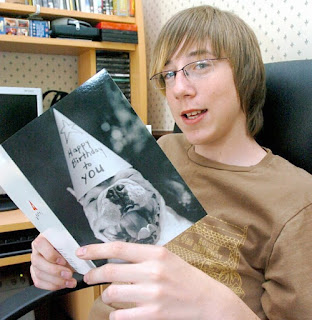 Reflecting on the bombers, Jack has little to say other than to describe their actions as “stupid”.

Mum Lesley speaks of her happiness, smiling at the son who is safely home on Tuesday. It is his 15th birthday.

“Ours is a happy ending,” she says with both relief and pride.

Jack smiles back, looking mildly embarrassed by his good fortune. He was due to return to London on Wednesday to continue his work experience. A little less a teenager – more a remarkable young man.
Posted by Wild Essex at 9:43 AM